As the solar industry boom continues, Peter Oram of GE’s Power Conversion discussed the role of GE in the renewable energy market segment.  GE’s Power Conversion provides the motors, generators, variable speed drives and associated control systems for the wind, hydro-electric, solar and tidal power generation segments.  At the 2016 Solar Power International show in Las Vegas, he provided details on their new silicon carbide inverters for the solar industry.  These inverters are focused on the utility scale market segment.

GE is positioning Silicon Carbide MOSFET (metal oxide semiconductor field effect transistors) devices to be the future of power conversion applications because of their increased efficiency.  Peter estimated average efficiency gains of approximately 1% over current solutions (99% vs 98% weighted average efficiency). He was careful to note that this compares favorably to competitors who normally cite peak efficiency measures.  GE has been looking at silicon carbide devices due to their higher operating temperatures, higher switching frequencies, increased power density and lower power losses.

When asked about cost, Peter mentioned that any cost differences between traditional inverters and GE’s silicon carbide inverters are compensated by the efficiency gain over the life the plant (25-30 years) at the utility scale. Silicon Carbide inverters leads to lower operating expenses and lower LCOE (levelized cost of electricity).  Peter indicated that customers are asking for these advantages to ensure their plants have the economic advantage both now and in the future.

Looking towards the future, Peter was asked about what the utility space might look like, in particular, how direct current (DC) solutions might impact the market.  In an ideal world, the rollout of pure direct current solutions would lead to lower capital expenses as well as lower operating expenses.  Peter suggested that GE’s high efficiency inverters, built on silicon carbide technology, help enable hybrid AC-DC solutions.  When the time for pure DC solutions arrives, he hinted GE would be ready for that market shift.  Part of GE’s vision is to have the capability to build a completely different architecture utilizing 10kV DC and then integrate that back into AC at the substation.  He noted that other areas of the industry might be moving in this direction as well.  These advancements would be helped by the shift to silicon carbide devices, of which Peter feels GE is the pioneer. 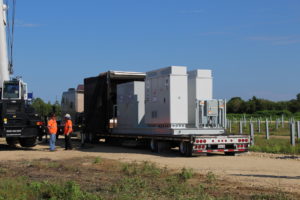 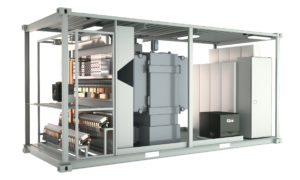 Efficiency and Resiliency CAN happen together – DC Microgrids Show the Way

When deploying a microgrid, operators can achieve high resiliency. If these microgrids are deployed with…

Working with the University of Pittsburg, PITT-OHIO demonstrates financial benefits to using DC based micro-grids…

Siemens announced a massive investment in microgrids at their Princeton, New Jersey campus. Will this…